As a starting point for adding end-to-end encryption, I’m going to choose minimalist chat written on bare .NET Core and JavaScript without any third party dependency. Let’s move from theory to implementation, but before that, I would like to give a bit of introduction in end-to-end encryption. What is it? What for? How?

Basically, a member of the chat encrypts a message before sending out, other members decrypts received the message. As a result, the chat server cannot see the content of the message. There are few ways on how to implement end-to-end encryption but I will focus on only one.

In order to achieve that I will make use of RSA algorithm. It is hard to explain how the algorithm works, more important is how to use it.

Each chat member gets 2 keys generated at the very start of room conversation. Let’s call them public key and private key. If a member encrypts a message using its public key then cipher can be decrypted only using its private key 1. This way, public key is sent out to other members. Eventually, all room members know other’s public keys, however, private key keeps being a secret.

Due to the limitation of RSA it cannot encrypt more than ~245 bytes. In order to break the limit, I’m going to use PGP it works practically the same way as RSA.

The beauty of modern browsers that they can perform cryptographic functions in JavaScript moreover this works pretty fast. I chose kbpgp.js by Keybase to enable PGP in JavaScript.

Server-side remains the same no changes needed. For client-side, first of all, I will wrap up low-level operations of kbpgp.js into high-level PgpKey class.

Before starting chat conversation PGP key will be generated for current member and their nickname. Since the nickname is included in generated PGP key anybody will know the key’s owner nickname.

Once a new member is connected to a chat room it sends out generated public key. As a result, other participants respond with their public key. Eventually, all room members know other’s public keys 2.

As soon as a new message as cipher is received it must be decrypted by the generated key that of course includes private key. 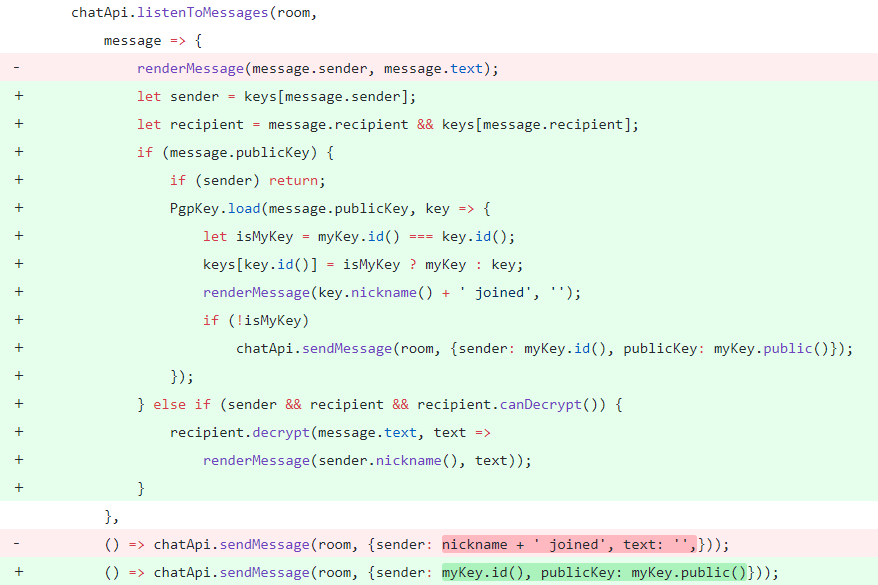 At this stage, all public keys of room members are known. Before sending, a new message must be encrypted with the recipient’s public key, hence the message will be sent multiple times, one per member.

Finally, app.gaevoy.com/cryptochat is ready to secure your conversation. Chrome Developer tools can show what server-side sees. 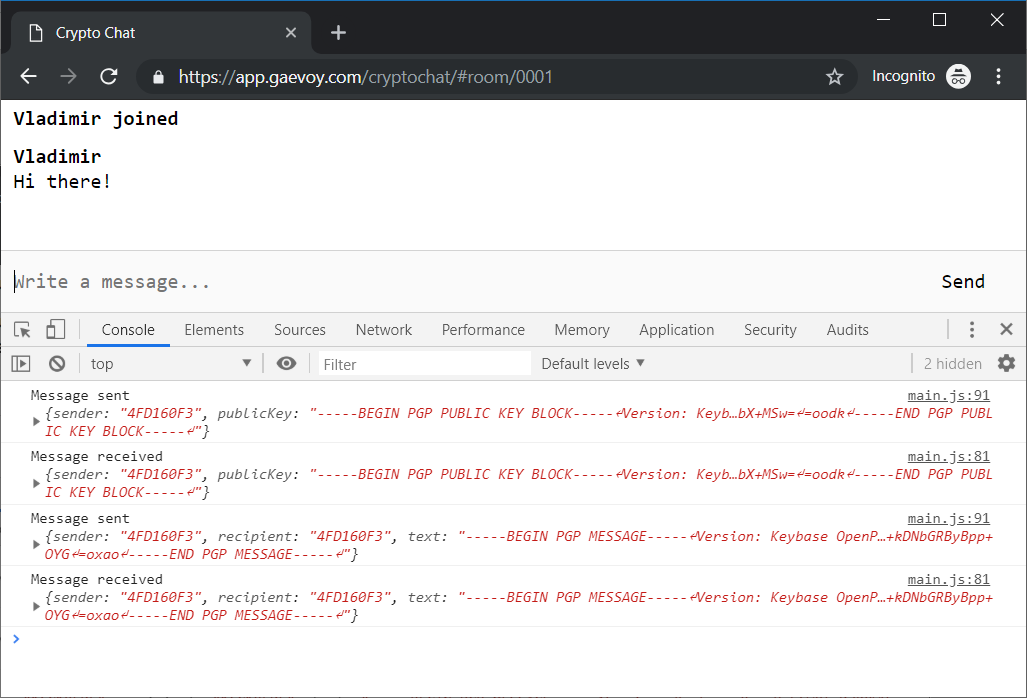 Take a look all changes in PR or source code I made for CryptoChat. Let me know what do you think.